One of my favorite parts of the PM job is to search and try new and fun ways of conducting Sprint Retrospectives. =]

Sprint Retrospective is an opportunity for the team to inspect itself and create a plan for improvements to be enacted during the next Sprint.

I like to think that when we start the retrospective the team is feeling like: “Yay! How are we going to tackle retrospective today? I’m so excited!” instead of “Oh okay, we’re doing that again.”

Interested to have a big picture of what’s happening inside the team? Let’s get to it!

Team Radar is very similar to the Competency Wheel. Radars are great because it presents data in a visual way, helping the teams understanding the present moment through a variety of topics. Since it is a visual tool, you can easily map “hot” topics and open the channel to start the discussions around it.

I’ve created a template with the topics I selected for this first Radar and printed copies for all the team. I selected some soft topics (collaboration, partner contact, fun) and mixed it up with technical topics (technical debt, definition of done, refactoring, scrum and design).

I also created a spreadsheet to record each one of the team’s inputs and quickly have the ability to assess the most important topics to discuss.

I’ve started the retrospective by sharing with the team what we would be doing and created a shared understanding regarding each one of the listed topics. We defined what would represent the smallest and highest values for each one of them.

Filling out the team radar

Using Radar’s printed version I asked the team to individually rate the topics based on what we defined for each one of them. We’ve used the scale from 1 to 10 and everyone marked down their answers. Refactoring and Technical Debt were the only ones that the smaller the value the better (less refactoring/rework, less technical debt for whatever reason).

Once everyone was done with rating the topics, I’ve asked them to connect the dots from the eight axis. Now everyone had their individual radar. It was so fun because some of them used their creativity to fill the radar out as you can check below: 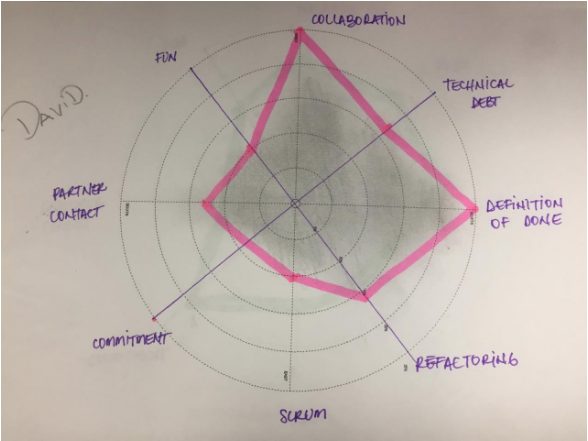 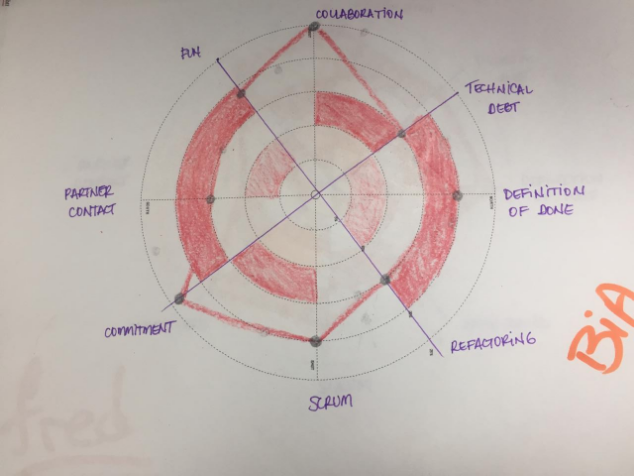 Taking it to the next level

We then transposed all this rich data into the spreadsheet and the result was the team’s radar as follows: 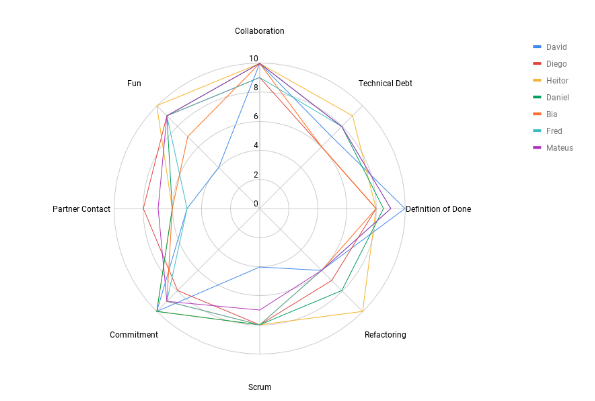 I displayed the team Radar on a big screen and the conversation about the most relevant topics started. We documented the key takeaways and generated some important action items from there.

The team had fun and I did too! It generated a lot of great discussions about the defined topics. The team also had the chance to propose some other topics to be discussed next time – this means we will do another radar retrospective for sure.

Retrospective: Do the team radar

Serial Ben & Jerry's eater. I love to hike and have fun with my daughter Nina. Huge Friends (the tv series) fan - Oh. My. God! View all posts by Roberta Oliveira

One thought on “The perks of a Team Radar Retrospective”