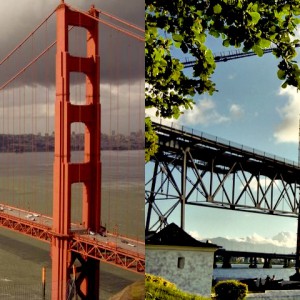 Here in Brazil, the private financing sector is stirring the tech market all over the country. We are now able to aim higher, in terms of startups, because of the cash injection that is being made by these VCs and private equity companies, filling a void of early investment. For instance, HIG Capital, an American private investment firm, invested about US$15 million in a software called PSafe, which offers free security in users’ data. And that kind of bet is not different in Florianópolis. Hidden between idyllic beaches and high-standard condos, there are plenty of tech entrepreneurs (also in mobile applications) trying to make it in the big scene, achieving their goals and getting global. But can we be a little over the board and snobby, stating that this small island of ours is the new San Fran? Well, these are 6 reasons why Floripa is just like San Francisco.

We certainly don’t have the fog, but the general tourist realizes, after some time, that Floripa isn’t warm and sunny everyday. There’s a special and chilly wind, called “vento suli” by the locals, which could freeze your soul if you’re not prepared with the right clothes. That’s pretty much SF, as folks there also get annoyed by incautious people wearing shorts, tennis shoes and a tank top in an autumn day. Even in the summer, there’s rainy and colder days that obviously make both travelers and residents to remain indoors. With such a unpredictable weather, the geek community keeps growing in Florianópolis, as they would rather stay in the safety of their homes.

While they are proud of their city, the locals in Florianópolis are very friendly to visitors, given that they will respect both the nature and their way of life. So, it’s reasonable to say that the island is crowded with people from all over the country, either visiting or looking for a place to live. Another interesting fact is that Floripa and San Fran both had a great hippie community, that settled in over the seventies (after all, the nickname of Florianópolis is the Magic Island). Naturally, the ideologies had changed and the open-mindedness increased – at least to some extent. In time, the hipsters became their successors in a more urbanized Florianópolis, comprising also tech people in their ranks and developing a new kind of rush in the island. However, the migration into Florianópolis grew a feeling of discomfort in those who were born in here. Rent prices never been so high and are still rising because of the extremely limited housing space (sounds familiar, San Fran?).

Floripa is not called the “Silicon Valley of Brazil” out of the blue. The IT sector keeps growing within the city, as the incentives from both government and the private initiative fuels up the start-ups and other companies into the global market. Besides, the city was qualified as the best place to enterprise, according to Endeavor Brasil, a NGO that supports the development of startups and business in general. That brought a lot of talented people to work in Florianópolis and also opened a new horizon for programmers and other professionals in the area.

We haven’t as many shops here as they have in San Francisco: it’s about 20 per 100,000 residents, but the Floripa ones stand out for their quality and uniqueness. Little by little, coffee shops are also consolidating here as programmers and developers began to learn the potential of a place that combines comfort, work and food. It’s just a matter of time that coffee shops start to swarm at every corner, full of people working and asking for the wi-fi password.

There’s a great number of big companies not only based in Floripa, but over the entire state of Santa Catarina. Just to name some examples of success and entrepreneurship, we got Chaordic, an e-commerce solutions company; ArcTouch, mobile app developer (like us!); Resultados Digitais, digital marketing, with their own software platform for SEO and consultancy; Embraco, global leader in compressors, supplying one in each four freezers in the world; and Weg Motores, reference in industrial eletric motors, producing more than 21 million units per year. With that kind of potential, hiring the best professionals is mandatory.

At last, but not least, we also got our own suspended bridge, the Hercílio Luz, which connects the island with the mainland. It’s deactivated since 1982, for security measures and, today, it is one of the most famous postcards of the city. As we’re on an island, the bridge is a symbol to translate what is happening now in Floripa: a link to higher grounds in terms of business and innovation, standing not just for a good sight, but having a broader meaning too. And we could even point that it is a smaller and charming version of the Golden Gate, our bridge was built first, in 1926. San Fran’s most famous bridge was only finished in 1937. Just saying!

Well, those were just a few similarities between the two cities. There are actually many differences, most related to culture and way of living. Here, at Cheesecake Labs, we like to believe we’re leading a movement that brings together the best of both worlds! Floripa is brimmed with a empowered software pros, emerging as a new power in the tech market. We’re part of the “bridge”, making the ideal of the “Brazilian Silicon Valley” come true, turning the world’s eyes towards our island. If you believe the same and agree with our thoughts, subscribe and keep tuned in our blog — more recipes are on the oven!