IoT innovation has been steadily emerging for the last decade. But in the coming years, it’s poised to take over big time. Where smart speakers were once in 6.6% of US households in 2016 and 32% in late 2018, that number is expected to rise to 75% of homes by 2025 — and that’s just one example of this rapidly growing sector.

With the network of devices expanding and becoming more commonplace in daily settings, the interconnected “world of the future” is shaping up around us. And it’s this rapid IoT transformation that’s paving the way for new innovations and possibilities — as well as fresh competitive advantage for brands who jump on board.

The marketplace is primed for IoT

To be clear, this surge in IoT interest is by no means an accident. Careful advancements, launches, and adoption rates have led to this sustained growth for the IoT marketplace. Below are a few of the key factors that have made IoT opportunities possible.

With massive companies like Apple embracing IoT innovation and bringing it to the masses, it’s only a matter of time before 5G technology and its possibilities become mainstream. That’s because several aspects of 5G make it an excellent catalyst for IoT.

For one, 5G allows for far faster, more widely available mobile connectivity. This is crucial for many IoT deployment cases. And as more people move to 5G networks and leave current LTE and 4G networks behind, there will also be more low-power network bandwidth available for IoT devices.

Equally as important, 5G’s high-data throughput allows for more complex computing to happen over telecom networks. This will pave the way for more intricate IoT solutions, akin to what we’re used to on personal computers.

People are getting used to the concept of IoT

Another factor helping to push IoT tech forward is the normalization of IoT. Smart speakers, digital automation, and smart home devices have all started to penetrate the market in a significant way.

It’s been slower than some may have predicted, sure, with many of these devices having existed for more than five years. But that can’t take away from the fact that market adoption is happening on a massive scale, especially among older Millennials (the 30-44 age group leads the way for use of smart TVs, smart speakers, smart security, and more).

The global pandemic has likely played a large role in adjusting people to the idea of hyper-connected services and devices too. Who hasn’t depended on digital-first services to get food, interact with loved ones, banking, telecommute to work/school, or speak to a healthcare provider over the last year?

This is likely driving the normalization of IoT innovation at an even faster pace, which is a net positive for the industry as well as individuals.

There is more data and data-sharing than ever before

Thanks to the increasing adoption, we’re seeing a more data-centric and data-sharing world than ever before. It’s not uncommon for a business of moderate size to have more data at its disposal than it is capable of parsing through without machine learning. And individuals are now expecting services to not only have an online platform, but to work seamlessly together with other solutions at all times.

This data renaissance both creates a platform for, as well as necessitates, IoT technologies. It’s creating the opportunity, driving consumer and enterprise demand, and posing a problem that only IoT, AI, and ML can solve.

Alright, so IoT innovation is growing in popularity, just as it’s been predicted to since its inception. Now, it’s time to look at this technology in practice.

Recently, the team at Cheesecake Labs had the pleasure (and challenge) of developing a one-of-a-kind IoT solution: THAW, a product of  Alliance Consumer Group.

Here is how our experience developing this IoT product went.

The premise behind THAW is simple: create a heated in-sole device for shoes. The in-soles connect to an app, allowing the temperature of the wearer’s shoes to be controlled manually and automatically.

If you’ve ever been out hiking, mountain biking, skiing, fishing, or hunting when the temperature drops, then you know how quickly cold feet can put an end to your fun — and that’s the problem Thaw looks to solve. Using the app, the user can control how warm their shoe’s in-sole is and what times it turns on.

How IoT took this idea a step further

Of course, this isn’t much of an IoT idea just yet — it’s still a really neat way to stay warm, but the connections aren’t there to call it IoT. So Cheesecake Labs partnered with the THAW product development team to take this concept a step further.

We worked with THAW to integrate current weather reports into the product. This way, the device will not only turn on when it’s told to by the user, but it can also notify the user when it should be turned on (after the weather drops below a certain point). Likewise, we also implemented a notification system so that the user remembers to charge the device whenever the weather is getting colder.

The challenge of THAW’s IoT

THAW isn’t just one device, it’s two (one for each sole). That means that both devices need to not only be connected and responding to the user’s input, but they need to be doing so synchronously, all of the time.

And yet, we also wanted the user to be able to specify distinct settings for each in-sole should they wish to. Whatever we built needed to work synchronously and asynchronously; back and forth whenever the user desires. 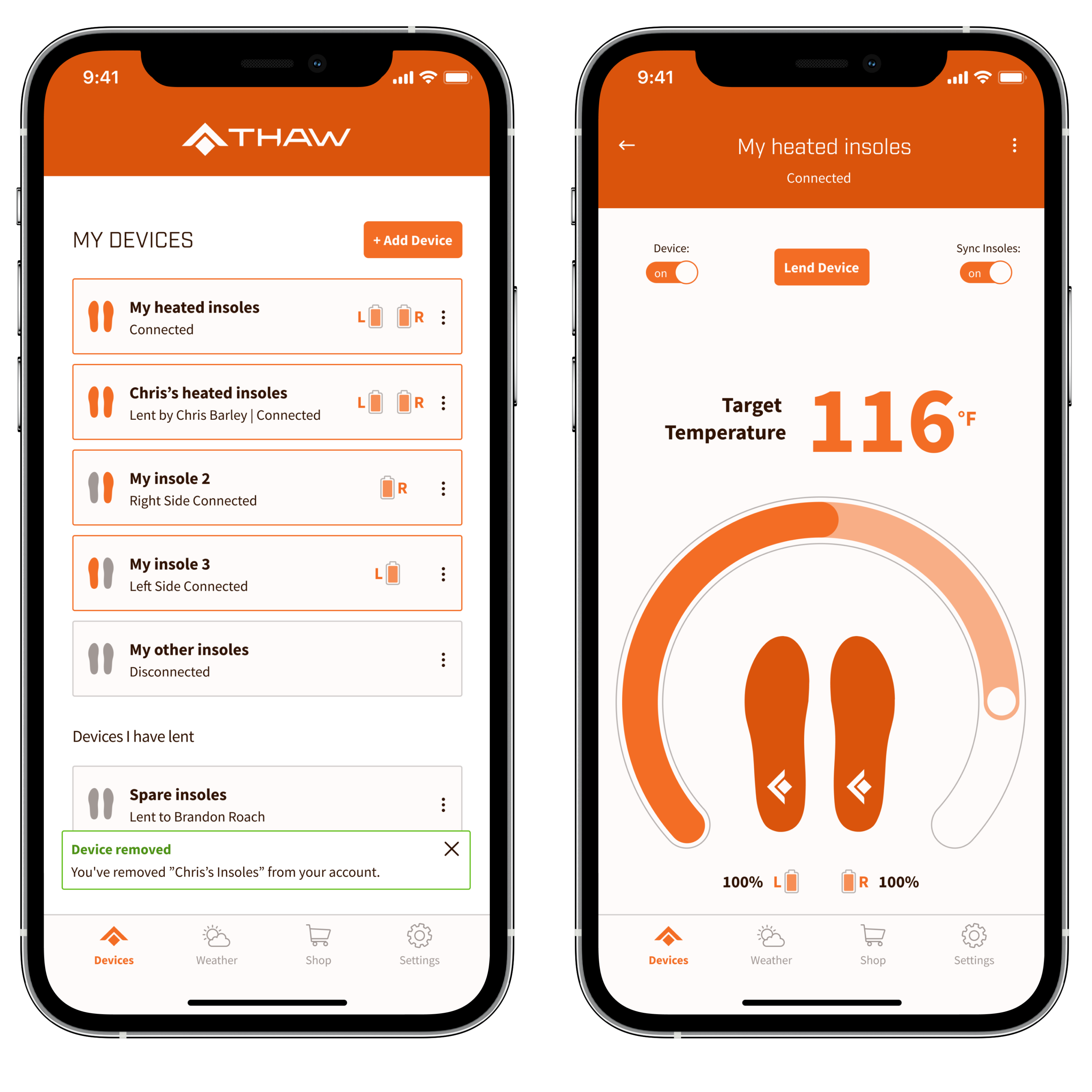 Using Flutter to make this IoT vision a reality

Conceptualizing how the app needed to work and the integrations it needed to have was just Phase One. Then we needed to come good on our ideas! To do so, the Cheesecake Labs team turned to Flutter — the development framework powering many of the world’s best apps.

You can write for Android and iOS simultaneously

With Flutter, you can write your application’s code once and deploy it to both Android and iOS simultaneously. When you consider all the variables of an IoT application — plus THAW’s double-device challenge — this offered a huge benefit versus native development.

Flutter is headed by Google, who wholeheartedly believes in IoT

Google is a firm supporter of IoT, evidenced by the fact that Flutter not only works with Android and iOS but also desktops and embedded devices (like Thaw). Likewise, Google recently began developing the Fuchsia OS, which is aimed to deploy on a wide array of devices (not just the traditional smartphones and desktops we’re used to).

There is a pre-existing library of tried-and-tested modules

Finally, Flutter comes with a vast library of tried-and-tested modules. This allowed us to dramatically speed up and simplify the development timeline of this project, while also mitigating risk.

Ready to dive into your own IoT development cycle?

The Internet of Things presents incredible opportunities for both consumer and enterprise applications — and we’re not just talking about years in the future, either. The time to start thinking about IoT innovation for your business is now, and Cheesecake Labs can help.

Reach out today and take your IoT journey on its first (or next) step.