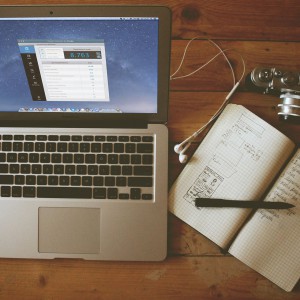 If you’re thinking about creating an iOS app, it’s essential to understand the best libraries that implement great functionalities with little effort. Thinking about that, we’ve picked the 9 hottest GitHub libraries that could help you save lots of time – and create amazing effects – while developing iOS applications that have the newest (and freshest) trending look & feel.

RNFrostedSidebar adds a nifty minimalistic sidebar that uses blur (which is iOS’s main trend when it comes to UI) to your app. It’s made by Ryan Nystrom, an iOS engineer on Facebook and author of others good libs such as RNGridMenu and RNBlurModalView.

Canvas brings the ease of adding UI animations to another level: using this amazing tool, not only coders, but also designers (who may lack experience on Objective-C programming) can get their hands on building the product through the interface builder.

Space constraints can be tricky to solve in mobile software. Particularly on iOS text fields, the default behavior is to have the hint text disappear as soon as you start typing. JVFloatLabeledTextField solves this problem in a very smart way: the placeholders float to the top of the input text once you start typing, so users don’t get confused. This is the most well known library of Jared Verdi, a programmer from Adobe, working at the mobile office of Behance.

MotionBlur adds a new concept of animation to a well-known menu type, making it attractive again. While the menu is moving, this library makes all the text/images within it blurred, giving users the impression of a higher-speed and smoother sliding. Arkadiusz Holko, a polish developer, is the creator of this lib.

CBStoreHouseRefreshControl is a fully customizable pull-to-refresh control for iOS. You can draw any image you like for the pull animation, as long as you can describe it as an array of startPoint and endPoint paths. This was created by Suyu Zhang, from Akta.

Shimmer, as the name implies, is used to give a shimmering effect to any view in an iOS app, like the ‘slide to unlock’ on the lock screen. It’s developed and maintained by Facebook.

BLKFlexibleHeightBar was posted on GitHub just a week ago and has already got more than 700 stars. It’s made for creating flexible header bars, that appear and collapse as the user scrolls down. You might know this effect from Facebook or Safari apps.

Last, but not least, we got Atlas, a library made to integrate a native messaging experience to apps. The objective was to create a lightweight set of UI components, using the iOS’ LayerKit and its functionalities to enable programmers to do their own changes and customizations.