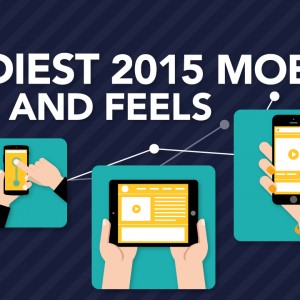 Hey there! Happy New Year and welcome to our first post of 2016! Since we’re at the beginning of the year, we’d like to review with you the trendiest 2015 mobile looks and feels. Let’s explore the  interfaces and experiences that were most used throughout 2015 and changed the way we see, feel and interact with mobile apps. If you’re a mobile app developer, hold tight: we’ve also prepared a few libraries as examples for each trend.

Material Design was introduced by Google in 2014. It can be defined as a new kind of ‘flat’ design, which, on one hand, presents layers, very subtle gradients and animations; and, on the other hand, is content-focused, flexible and streamlined. This smart approach that combines the best of two styles makes mobile apps look cleaner and load much faster, since it eliminates many unnecessary elements.

On our routine, we love things that can help us deal with our daily tasks, and if you can’t imagine your life without your phone, a great app or a wearable, chances are that it’s because of the microinteractions you have with it. Microinterations are simple actions—sometimes nearly invisible for their small size—that can play a vital role in your experience as a user. Examples of microinteraction include clicking on the “Like” button of a post on Facebook, swiping an e-mail notification or the e-mail itself to delete it, and pulling the screen the refresh the app.

The ‘card’ style (or tile style) layout has emerged as a great way to organize large amounts of content into boxes, which include small bits of information and often images. This approach is very flexible and functional, once the cards can be reordered to fewer or more columns, larger or smaller tiles in order to suit the screen size of the device. Trello, Pinterest and Flipboard are three awesome examples of this technique.

It is safe to say that, between scrolling and clicking for browsing content, you—as mobile device user—prefer scrolling, right? Not only because it requires less effort, but also because it brings new data in a much faster way, for the content is normally loaded all at once (or before you realize you’re going to access it). No wonder this approach gain overall popularity every day.

The same way Material Design took a step in the direction of a minimal design, color palettes have also been brought back to more subtle schemes—instead of bold palettes that we often see in web design, for instance. While bright hues of color can draw in someone’s attention, they can also backfire and result in distraction. However, subtle colors can help attract users and allow them to stay focused on the content. Such technique optimizes the flat design and make elements become more interactive as well.

The time when animated elements were used in apps only to visually impress their users is long gone. Besides working as an entertainment, using animation can make the interaction with the app much easier, not only in a motivational sense, but in a functional way as well. By using animated elements, the apps can also be customized to provide a more effective and pleasant experience for their target audience, thus making them attractive and relevant.

Blurred backgrounds are pretty common when it comes to web design. However, the use of blur effects in mobile applications is recent and has been increasingly adopted over the past year. Besides making the design visually pleasing, this technique helps users to know what is interactable and what isn’t in the app’s interface, switching their focus to important elements.

Along with scrolling, clever gestures have demonstrated to be the new clicks. Every app—doesn’t matter whether it’s a game, a tool or of any other kind—has a swipe, pinch or tap gesture to work. This kind of feature allows users to benefit from a quicker response, as well as the comfort feeling of being able to interact with devices of several sizes and shapes. Some of the most common clever gestures include tap, double-tap, pinch/spread, drag, press, flick—and even the brand-new 3d Touch from Apple.

What does 2016 hold for the mobile apps?

These were the trendiest mobile looks and feels of 2015. And you, as a mobile device user and/or developer, do you believe these looks and feels are going to stay strong this year?
Share your thoughts! And if you can think of any other trend from last year, feel free to write a comment or contact us.
Stay tuned for the next posts on newest trends throughout this year!